I have had the great pleasure over the past ten years to work for the Jim Henson Company.  It’s been a life long dream of mine to be part of such a great entertainment giant in the field of puppetry.  About a year and a half ago, I got a call from the Muppets to shoot a day on a feature film starring John Travolta, Robin Williams, Seth Green and Bernie Mac, called “Old Dogs”.

Together with 6 other Muppeteers I took a van ride from NYC to some theater in Connecticut.  The character I was to perform was this huge bird thing.  Jim Henson himself, designed it for some TV show in the 70’s that never got made.

I did not know much about what we where to shoot that day.  I got to set only to find a freak show of sorts.  Their where little people, hip hop dancers, cheerleaders, clowns, and then me and 5 other huge full body puppets from the storage / reject pile from the Muppets vaults.

I got to set in full costume for the blocking of one of two scenes that day.  There I was, a huge bird thing standing next to a midget, a sexy dancer and a odd looking Muppet thing, and a guy dresses as a panda.  Then out of the blue you heard the laugh of Bernie Mac.  He turned the corner and took his place right in front of me.  Behind him followed Robin Williams and John Travolta, who has the largest head I have ever seen, really big noggin.  So for the first half to the day I stood there in full bird costume as Bernie Mac improvised his lines right in front of me.  It was hilarious and he was really great.

After lunch we gathered to shoot the big stage show performance bit.  We took our places and then the director shouted action.  As I danced on stage in my bird puppet a trap door opened in the center of the stage and up came Bernie Mac.  When the smoke cleared he would play some fake guitar and sing some stupid song. 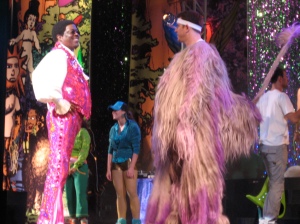 Do I look fat in this bird?

It was between takes when we got the opportunity to chat a bit.  He was a very sweet man, who was followed everywhere he went by a lady I think was his wife.  She gave him an oxygen tank at every turn, to help off set the smoke he had to take in.  I now believe that his respitory problems did not help matters much.

We did not talk too much, but when he asked me at one point how I thought the last take went.   I replied.  “You the man Mr. Mac.”

And that he was.

This entry was posted on Monday, August 11th, 2008 at 4:28 am and is filed under Comedy World, Josh Cohen. You can follow any responses to this entry through the RSS 2.0 feed. You can leave a response, or trackback from your own site.